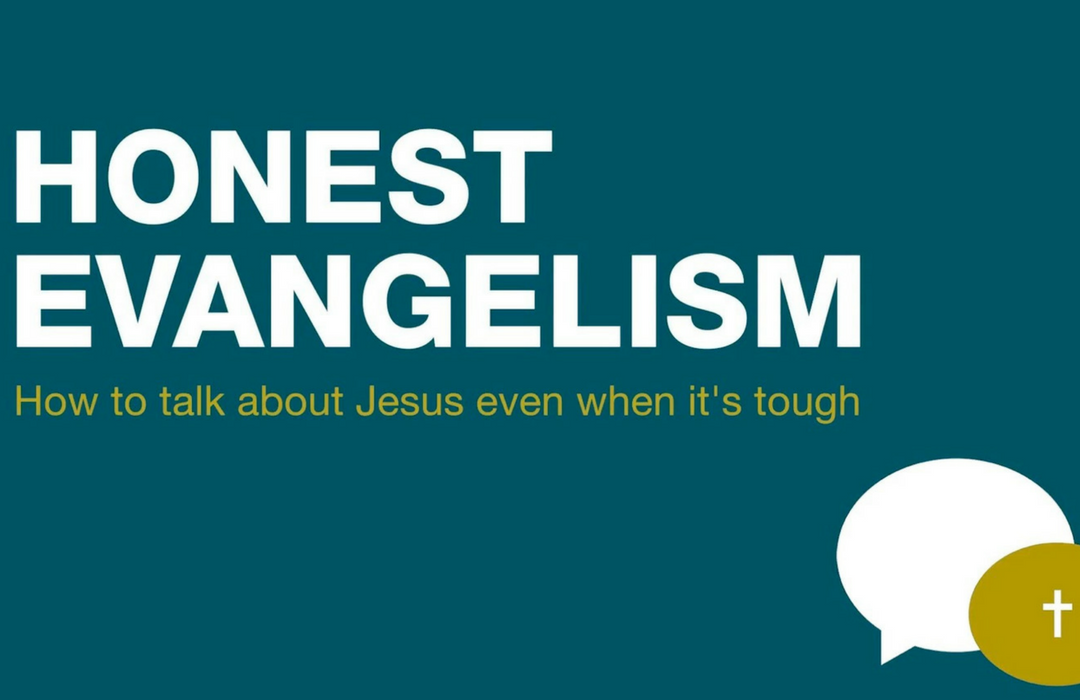 For many Christians evangelism can be a difficult subject to talk about. Much like bringing up religion or politics at a dinner party can quickly spoil the lighthearted mood and casual conversation around the table; the very word evangelism can have the same effect within the church—evoking feelings of guilt, anxiety, and insecurity; even fears of rejection and failure at the thought of talking to unbelievers about Jesus—which is why it has become much more convenient for some to simply ignore the topic altogether, perhaps even justify why it hasn’t become more of a priority in their everyday lives.

While evangelism may be an inconvenient truth for some, however, Rico Tice believes it is an essential responsibility of every true follower of Jesus Christ. “I may not be a Bible teacher, but I am to be a Bible sharer,” he writes in his latest book, Honest Evangelism: How to talk about Jesus even when it’s tough.

Tice, founder of Christianity Explored Ministries, wants to change the way many Christians think about evangelism, and by doing so believes that more of them will start getting excited about actually doing it more often…or perhaps for the very first time!

True to the title of his book, however, he does admit honestly, at the very beginning—“I find evangelism hard.”

The “Painline” is the Problem

Why are so many evangelicals not evangelizing?

“The main reason why we don’t do evangelism,” Tice argues, is because “I know there’s a painline that needs to be crossed if I tell someone the gospel; but I want to stay the comfortable side of the painline.”

Talking to people about Jesus is “risky,” he says. And yet, as Christians, our encounters, conversations, and relationships with people will (and should) inevitably bring us to a crossroads—the “painline”—risking awkwardness, conflict, even outright rejection in some cases. But because most of us would rather stay on the comfortable side of this line, by default we don’t often cross over, perhaps even convincing ourselves it’s the polite, respectful thing to do in most cases.

Tice reminds us, however, that the very nature of evangelism (and for that matter, being an evangelical) is subversive (Mt. 10:34-39)!

Hostility is Part of God’s Plan

While many of today’s evangelical Christians are creatures of comfort—“rabbit hole” Christians, as one writer describes them, who “in the morning…pop out of their safe Christian homes, hold their breath at work, scurry home to their families and then off to their Bible studies, and finally end the day praying for the unbelievers they safely avoided all day”—Jesus, on the other hand, sent his disciples out for the first time to tell others about himself with an expectation of facing hostility. “I am sending you out like sheep among wolves” (Mt. 10:16).

Their comfort seemed to be among the least of his concerns! And yet by God’s grace, the prospect of facing hostility did not send them running for the hills, or cowering in a cave somewhere. Rather, they were emboldened and empowered to be among those who “turned the world upside down” (Acts 17:6)!

Being honest about the difficulty of evangelism and the likelihood of facing hostility today should likewise prepare us, rather than prevent us from telling more people about Jesus.

Ironically, in 1 Peter 3:15 it’s the same apostle who denied his Lord three times who encourages us to be prepared at all times to bear witness to the truth:

“In your hearts revere Christ as Lord. Always be prepared to give an answer to everyone who asks you to give the reason for the hope that you have.”

Tice reminds us that Peter wrote these words to Christians who were facing intense ridicule (cf. 1 Cor. 1:18) and persecution (1 Pet. 3:14, 16). Far from the ideal conditions many Christians today would love to imagine themselves in when speaking to others about Jesus, “1 Peter 3:15,” Tice says, “is about getting attacked, and then answering back clearly, about Christ, and with respect.” Facing hostility, therefore, is part of God’s plan!

Being prepared and equipped to evangelize in such conditions, however, “is only half of the story,” says Tice.

It’s easy for us to see that Christianity is becoming increasingly marginalized in today’s society. And yet, as hostile as so many may be to both its message and its messengers, we must resist allowing ourselves to adopt an “us versus them” mentality that leads us into retreat mode within the church—failing to engage people outside of the community of faith.

Even despite the fact that Jesus faced the most unjust treatment and severe punishment himself from the very ones he came to save (Jn. 1:10-11), he nevertheless endured such hostility with joy (Heb. 12:2)! How? Why? He knew full well that his faithfulness in doing his Father’s work would be rewarded by his Father choosing to save not only those who “have believed” (Jn. 17:8), but also those who “will believe” (Jn. 17:20)! His work therefore was not in vain, and neither is ours!

The promise and expectation of success Jesus hoped for, Tice says, should encourage and motivate us just the same to be faithful in carrying out the work of evangelism today. “As you sent me into the world,” Jesus prayed to his Father after preparing the disciples for his departure, “so I have sent them into the world…even though the world does not know you, I know you, and these know that you have sent me. I make known to them your name, and I will continue to make it known, that the love with which you have loved me may be in them, and I in them” (Jn. 17:18, 25-26).

What a great privilege and promise! Through the power and ministry of the Spirit of Christ, as Christians, we have the same hope today that Jesus had while on earth—that our work and witness for him will be effective because our Savior and King is sovereign over ALL of salvation (Mt. 28:18; Jn. 6:37, 44)!

While we should expect difficulty when it comes to evangelism, Tice believes as well that we must be motivated to evangelize by more than just a guilty conscience:

How excited are you about evangelism? As excited as Jesus was to come down from heaven to do the Father’s will on earth? As excited as Peter and John were even after they were threatened and charged not to testify to the truth about Christ saying, “we cannot but speak of what we have seen and heard” (Acts 4:20)?

Just as in Jesus’s day, today there are many like the Samaritan woman (Jn. 4) who are thirsty for something that truly satisfies. And yet unless they are told the truth—“If you knew the gift of God, and who it is that is saying to you, ‘Give me a drink,’ you would have asked him, and he would have given you living water” (Jn. 4:10)—they will never find what it is they need. “How then will they call on him in whom they have not believed? And how are they to believe in him of whom they have never heard? And how are they to hear without someone preaching” (Rom. 10:14)?

As Christ's ambassadors today we have the privilege and opportunity to point people to the source of “living water,” Jesus Christ himself—who is also the “bread of life” to whom “whoever comes…shall not hunger” and in whom “whoever believes…shall never thirst” (Jn. 6:35). For by God’s grace, HE will draw men and women to himself. And all those who have been “appointed to eternal life” (Acts 13:48) will believe because HE is mighty to save!