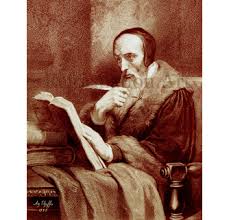 Now I take the gospel to be the clear manifestation of the mystery of Christ. I recognize, of course, that since Paul calls the gospel “the doctrine of faith” [1 Tim. 4:6], all those promises of free remission of sins which commonly occur in the law, whereby God reconciles men to himself, are counted as parts of it. For he contrasts faith with the terrors that would trouble and vex the conscience if salvation were to be sought in works. From this it follows that the word “gospel,” taken in the broad sense, includes those testimonies of his mercy and fatherly favor which God gave to the patriarchs of old. In a higher sense, however, the word refers, I say, to the proclamation of the grace manifested in Christ. This is not only accepted as a matter of common usage, but rests upon the authority of Christ and the apostles [Matt. 4:17, 23; 9:35]. Hence, the fact that he preached the gospel of the Kingdom is properly attributed to him. And Mark prefaces his Gospel with: “The beginning of the gospel of Jesus Christ” [Mark 1:1]. There is no need to heap up passages to prove something so fully known. “By his advent Christ … has brought life and immortality to light through the gospel.” [2 Tim. 1:10 p.] Paul does not mean by these words that the patriarchs were shrouded in the shadows of death until the Son of God took flesh. Rather, he claims this privilege of honor for the gospel, teaching that it is a new and unusual sort of embassy [cf. 2 Cor. 5:20] by which God has fulfilled what he had promised: that the truth of his promises would be realized in the person of the Son. Believers have found to be true Paul’s saying that “all the promises of God find their yea and amen in Christ” [2 Cor. 1:20 p.], for these promises had been sealed in their hearts. [Cf. 2 Cor. 1:22.] Nevertheless, because he has in his flesh accomplished the whole of our salvation, this living manifestation of realities has justly won a new and singular commendation. From this derives Christ’s saying: “Afterward you will see heaven opened, and the angels of God ascending and descending upon the Son of Man” [John 1:51 p.]. Although he seems here to allude to the ladder shown in a vision to the patriarch Jacob [Gen. 28:12], how excellent his advent is he has marked through opening by it the gate of heaven, that each one of us may enter there.